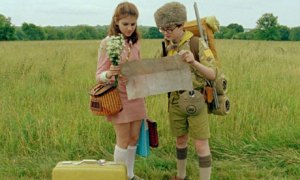 I’ll avoid spoilers because I know not everyone has seen it and this will be rather brief.

I might love Moonrise Kingdom. I know I really like it. It ordinarily takes me several views of Wes’s films before I feel certain about just how much I liked it, for instance I thought I disliked The Life Aquatic for years only to rewatch it and discover that my familiarity with his style, sense of humor, and love for Bowie brought about one of the largest turn arounds I’ve ever had on a film. Portugese variation of Ziggy Stardust performed by Knockout Ned from City of God? Hell yeah.

Oh yeah, Moonrise Kingdom. This is not a film from him that will likely sway any dissenters. All of his trademark quirks and choices are in place. Dry, slowly delivered dialogue? Check. Slow mo walk to music? Check. Moments of genuine feeling melodrama? Check. Themes about the importance of family, no matter how dysfunctional? Double check.

Where Moonrise sets itself apart is its story and cast. While Murray and Schwartzman are ever present, they are relegated to substantially smaller roles than usual, and though the lack of the Wilsons, Blanchett, Dafoe, and other Anderson constants is recognized, newcomers to his ensembles like McDormand, Keitel, Swinton, Norton, and Willis more than compensate. I was shocked by how at home Willis seemed in this cast and in many ways, he represents the humanity many adults seem to lose, even if its hidden under his gruff exterior.

The child actors were good, by the stylistic acting made it difficult for me to gauge just HOW good. Their trek through the wilderness manages to be simultaneously amusing, touching, nostalgic, and not without melancholy.

It is, however, when Wes stretches slightly beyond his comfort zone that I feel the movie truly succeeds. There are times when the film feels like a parody of military/ action movies, mocking openly the overtly serious Boy Scout-esque organization and the acts of heroism and villainy the people within commit. I found during the “action scenes”, the shaky cam excellently juxtaposed the typically ultra smooth, nigh sterile dolly shots we are accustomed to, making it feel that when our protagonists are at their most aggressive, they are also at their most vulnerable and human.

This is a good film, possibly a great one. I do not think it is above my favorite Anderson films, as I don’t think it quite reaches the emotional or humorous highs of Royal Tennenbaums, Rushmore, or Fantastic Mr. Fox, but it does easily fit in among his catalog.

Lastly, this was my first time seeing a movie of his in a theater (well, technically I saw FMF, but that was at a second run dollar theater and I and my girlfriend were the only people there). Now, many of you may have picked up on this by now, I’m a curmudgeonly misanthrope and while my audience wasn’t particularly disrespectful, I felt awkward and the amount of guffaw and mass laughter in the audience. I understand everyone reacts differently, but I really felt alone in finding his films, including this one, to be more amusing and grin worthy than bust a gut inducing. How do you all react when watching his films? I think I may laugh out loud only a couple of times per movie. It is everything else, the cinematography, tone, and plots that make me truly adore his films.

So, go see this movie if it’s available near you and you like Wes.