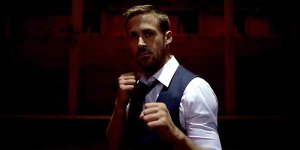 There will be SPOILERS in this review.

This is a divisive film and not without reason. It’s slow, filled with graphic violence, unlikeable characters, and asks for most of the gratification to come from analysis rather than direct, pathos appeal. I’ve gotten over my initial, mislead shock as to the critical reception for this film being almost overwhelmingly negative (it’s got a lower tomatometer than Dark Skies and the Call) but that bears little on my only personal response to this film, which is very strong as I have not stopped thinking about it since I saw it. In that regard, it is alone in this year’s releases.

On a technical scale, the film is Refn at the top of his game. Every shot is beautiful composed, carrying with it visual metaphor or the subjective perspective of either it’s antagonist or protagonist. I’ve heard many films described as masterpieces because, among other things, virtually every shot could be isolated and framed as work of art. Only God Forgives enters this pantheon of films in it’s drenched in neon light and shadows style. To put it simply, the film looks astounding.

The film is edited to create a surreal atmosphere. Shots and characters move with dreamlike lethargy which instantly removes us from any notion of “reality”. Frequently the film fluctuates between relative reality and dream, though it is left for us to question whose dream we are witnessing, be it that of Julian (Gosling) or Chang (Pansingarm). A telling instance of this, is when, simultaneously, Julian is restrained, watching a prostitute masturbate and also in a hallway, slowly reaching out into a darkened doorway while Chang waits beside him ready to slice off his arm. The repetition of these types of visual metaphor are persistent throughout the film and are what provides it with the worth I found. I reject the notion that this is “all style, no substance” as this sort of style is substance and well worth taking seriously.

The audio mixing/editing and scoring also beg mentioning in the way they symbiotically work with the stripped down narrative and dialogue. The works of Kitano echo in this film even more loudly than they did in Drive in this area. Someone (I think Ebert) once described Kitano’s works as something that trim the plot of all fat until only the essentials remain and that is very much the approach that Refn has opted for this film. At times, he chooses to subvert genre norms by robbing it of the exposition so often associated with the crime western. While both he and Kitano startle us with booming gunshots, outbursts that echo in our ears compared to the extreme silence, and use stares to convey the emotion of the character and keep dialogue streamlined, here he will allow his characters to talk but mutes them, allowing Cliff Martinez’s score to swell and tell us everything we need to know. The music becomes integral not only in the non-diegetic sense, but manifests itself prominently in characterizing Chang, the antagonist/sheriff archetype character that I will spend a good portion of this review analyzing.

Chang and Julian are the two primary characters of the film. Each one fulfills an important aspect of developing the various themes in the film yet unlike many movies that use archetypes well (ya know, the way Damon Lindleof doesn’t use them), Refn cleverly develops them as individuals that allow them to be fleshed out characters on their own right.

Julian’s existential crisis is the crux of the film. In various ways he’s developed as impotent, castrated, without meaning, and incapable to connect. He is a passive protagonist and all of his attempts to take the reigns of his life are met with anti-climax (sexual pun intended! I guess…). Three times we see him reach out into something. Twice he is denied. The first, is the aforementioned hallway. His hand is open, submissively, and reaching out into darkness. We don’t know what he’s reaching for and we are denied the gratification of learning this, as his hand is abruptly removed by Chang and his sword. This denial of connection is juxtaposed with his arms being restraint as the prostitute masturbates and climaxes. He can’t touch her despite wanting to, desperately. All at once, this scene sets a precedent for this continued motif while sexualizing Julian’s hands/fists.

The second time we witness this, Julian stares longingly at the prostitute. Once again, reality and dream/fantasy are intercut. He watches, longing, and in his fantasy he reaches for her. First, he offers her a fist then relaxes into a hand and reaches into her legs. Once again, the sexualization of his hands is solidified. Immediately after the fantasy ends, Julian is scene violently assaulting two men in the bar. The fist image and the actual fighting add another layer of subtext- that of violence. Refn has made the claim of violence being his fetish before and, with Bronson, is no stranger towards his blending of violence with homoeroticism, implying that violence against another man, the domination of which, is sexual in nature. Here, it becomes a defining aspect of the film and Julian.

Between this time and his final reach, we witness him combat Chang. This fight is not only exceptionally filmed and choreographed but follows through on all of these themes. He fails to make a connection with Chang, remains impotent, and is further emasculated and dominated. The final reach is the most memorable. Taking place quite a time after this, when looking over his mother’s dead body. It is the true climactic moment of the film. Julian cuts open his mothers womb and reaches deep into her. The scene can be read in a variety of ways but I choose to view it as him finally making the only connection left for him and it is simultaneously with his path and death. Even in this connection, he is left unfulfilled.

Chang, on the other hand, is a vastly different character. He is the continuation of the themes One-Eye represented in Valhalla Rising. He is the physical manifestation of the old testament God. He is neither good nor bad, but rather a brutal force that lords over the subjects of his ethereal realm. His mystic nature is emphasized again and again. He is unstoppable, untouchable, and shows signs of omnipotence. He can see an opponents actions before they make it, anticipating every one of Julian’s blows, an assassination attempt, and where that assassin would go. He retrieves his sword from behind his head after he is clearly shown to not be carrying anything. Chang also fulfills the western archetype of the Sheriff and in both this and his God manifestation, represents a supremely oppressive force despite being morally more justified than the rest of the characters. Julian’s conflict of him is fueled by Julian’s desire to conquer the force that has put him in his situation. The entire film is, in essence, a visual metaphor for Refn’s own conflict with wanting to fight God after his wife’s troubling pregnancy put him in a place of darkness and depression. I’m most often taken with art that is a deeply personal expression and by this maxim this is far and away Refn’s most personal work.

But even with this high arching characterization of Chang, one of my favorite developments of his character is one that carries over a thematic principal of Drive- the catharsis that music provides. Even as God, Chang needs a release from the gruesome job of punishing those he views as guilty. That release is captured in powerful and beautiful scenes of karaoke. The final song, featured in the red band trailer, still haunts me with its beauty and melancholy. The song seems to be purposely left unsubtitled for the same reason there is so little dialogue in the movie- the language is not important. The emotional drive it provides is what matters.

I loved this film a great deal and it may eventually end up my favorite film of the year. I know many will disagree with me on this but it is a film that inspired me to think and analyze it endlessly. Where they see emptiness and shallowness, I’m swept away by it into this strange dark world and isn’t that what makes art so amazing?

I could go on more about the various ways the film employs off screen and on screen violence, gender, Julian’s family, and the way it managed to find original meaning in age old genre tropes, but I think I’m going to end this now. Whether you end up hating it, loving it, or somewhere in between, this is a film worth watching.