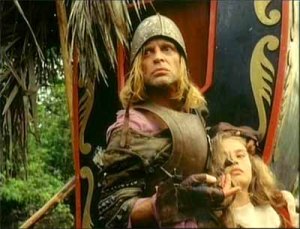 Once again, beware. There will be spoilers in this review.

Herzog is a man obsessed with man vs. nature and in no film is it more clear than in Aguirre: Wrath of God, which may be his magnum opus. I may be premature in making that claim, as I’ve seen very little of his early work, but in terms of his fictional works, this is his very best. I say fictional, because the man made my favorite documentary, Grizzly Man, which is a must see for everyone. I may do a write up for it in here later but I don’t know what I’d say beyond “WATCH THIS MOVIE.”

Back to Aguirre, never before has Herzog’s themes been more potent and powerful. I feel he was more pessimistic about humanity at the time that he made this, as his modern films are much more sympathetic to their anguish. Here, he is as merciless as it’s titular character and the jungle that surrounds them.

The jungle is used to maximum effect, not only as an adversarial force and purgatory substitute, but as a physical manifestation of the “natural madness” within all men. By “natural madness”, I mean that Herzog appears to believe that the natural state of the world is chaos. It’s cruel, brutal, and ugly. The Spanish conquistadors, in their armor and lavish “modern” fabrics look humorously out of place, embodying man’s hubris in how they think that they are somehow above this, separate, but it is all delusion.

Again and again, there are scenes that show the irony of these ‘civilized’ men as they cut down natives over slight misunderstandings, turn on each other, murder each other, and it all builds in a blinding fury until nothing is left. The line has been crossed. Society is gone.

One of the most striking images is of Aguirre walking around his raft, all around him dead. His raft has become infested with monkeys and he stalks them, isolated and muttering madly about the power he will have. The camera swirls around him more and more, showing nature almost as if it’s an imposing army about to swallow him whole… He is the wrath of God but that means nothing to the world beyond men.

It’s a crushingly nihilistic film that attacks imperialism, religion, ethnocentrism, greed, and everything ugly about humanity. I also feel that the fact that it is a multi-lingual film lends a universality to it’s criticisms of man, rather than simply focusing on the Spanish conquest.

And it is here that I must mention Kinski’s performance and character, that so wholly embody all of those deeply monstrous, deeply human aspects. I’ve never seen a more uncomfortable looking actor, such rage lurking just barely beneath the surface. He constantly walks at a slant, as if the pain of existence is almost too much. To call Kinski brilliant and mad would be an understatement, one need only look at the stories from behind the scenes to know this is true.

This is a film where the filmmaking and final product are married in difficulty and brilliance. Herzog’s cinema verite style along with making the actors essentially do everything we see them do lends the film an authenticity few can match. The madness and rage that caused Kinski to shoot off the finger of an extra and Herzog threaten him with a murder suicide are felt, even if they are never seen. It’s a staggering accomplishment.

So like Apocalypse Now after it, Aguirre: Wrath of God manages to be all at once an engaging fascinating fever dream of a story and elevate itself to greatness with provocative themes.

I recommend it to everyone with patience and an open mind.