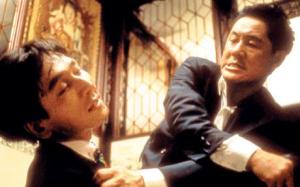 Spoilers in all but the final word.

Kitano is an interesting figure in Japanese cinema. His badass acting persona, his succinct story telling, the graphic violence, his game shows… So it is with great shame that I admit to being a novice with his films. I’ve seen his role in Fukasaku’s Battle Royal, as well as his own film, Hana-bi, but aside from that, I’ve seen first hand very little.

What I got from Sonatine is that I do need to change this. Stylistically, it is very similar to his other film, but I am viewing this one as an older, more mature film watcher that is more capable of appreciating the nuance and reasons behind his style that I was hardly capable of 6 years ago, and that gives me a far appreciation for both films.

Kitano strips his films of many of the common facets of traditional story telling. Dialogue is sparse, concise, and nearly without personality. Plot moves slowly, often with nothing more than some stern glances and inference to propel it from one scene to the next. What’s left is almost surreal in it’s depiction of the Yakuza life.

For the first act of the film takes place in Tokyo where we experience the criminal underworld through the eyes of Murakawa (Kitano), a bitter Yakuza boss. What’s striking here is the contrast in the depiction of this organized crime ring and those of American films. There is very little grandiose bluster or excessive opulence. There is also very little sense of the brotherly love and loyalty that is synonymous with being part of a “family” in popular fiction. The men all look miserable. They only speak in short replies, rarely make eye contact, and randomly display their displeasure with each other through acts of violence.

It is here that I want to bring up the cinematography and how it plays a pivotal role in giving the story meaning it would not ordinarily have. It is impossible to watch this film and not see the influence that Ozu had. Both he and Kitano use a first person shot reverse shot technique to place you in the shoes of the characters being interacted with, but where Ozu used this to envelope the audience in his world, Kitano uses it to imply the emotional distance and isolation of the characters. When these people speak to each other, it never feels like a unified conversation, but rather characters talking AT each other. Kitano films the violence in the exact same manner. We see a man shooting, then we see another man being blown apart. It is that lack of empathy and connection that drives these men, allows them to kill with nothing but indifference, and ultimately, destroys them all. When a conversation is as common and uneventfully as a bloody shootout, what is left for these men but to solemnly follow the path they’ve carved?

The second act deals with the temptation of a simpler life outside of crime. The men go into seclusion during a gang war. Here is where we get to know the characters and see them try to be, well, human. They play childish tricks and pranks on each other, they sing and dance, and the younger ones show how the realization of what they do has yet to dawn on them, by playfully shooting the guns off of each others heads. It is also with the young ones that Kitano breaks his shot reverse shot rule. The two men are the only ones filmed together in the same shot, regularly. They attempt to bond and eventually carve out a friendship. However, when one of them is put in the line of a gun, this togetherness is shattered and it is a return to the same visual style, the same violence, and the same world for them to return to. At the man’s death, Murakawa sits silently and without emotion, a return to his original stature, but now we see it juxtaposed by the happy joker that was freed from that world for that brief period of time, free to play and fall in love with a girl (whom he stopped from being raped in a rather cool scene). Back to reality.

When the film culminates in his final confrontation, it feels satisfying not in that it is dramatic or necessarily intense, but because it solidifies the themes of isolation and how none of these men care about themselves or each other and will kill with little provocation: A snake eating itself.

My only real issue is the final scene. (If you’re still reading and haven’t seen it stop and skip to the final word RIGHT NOW). The girl waits for Murakawa to return and then it is revealed that he almost went all the way to her, but then shoots himself. This is not a bad ending as the suicide angle was somewhat built up, but it still feels sorta slapdash and not completely satisfying. I understand that the point is to deprive himself of that happiness because that world is not for him anymore, but the suicide just feels too melodramatic, especially with the build up. I feel it would’ve been more powerful for him to just turn around and drive away. He would still forgo himself of the happiness but would also show him refusing to enact violence upon himself. He would be resigned to return to his world of purgatory because as much as he can disengage from other people, he can’t disengage from himself. As is, it’s okay.

Final Word: If you want to see a film that is likely a heavy influence on films like Drive and Cronenberg’s crime films, watch it. Be prepared for a slow burn and for something more mood and visual based than plot, though. I recommend it. I really liked it.